This is a recent case study of a little girl who having started nursery was experiencing some sleep regression. Mum contacted me and enlisted me to coach her in order to get Jamila's sleep back on track. Hopefully you will find this helpful if your dealing with a similar situation. Please note names have been changed due to confidentiality.

Jamila is an 18 month old toddler who has just started going to day nursery 3 days a week. Up and till 6 weeks of attending nursery,  Jamila had been a good sleeper overnight. Her mum had set in place positive sleep associations and a bedtime routine from quite early on in Jamila’s life and she regularly slept from 7 till 7am every night with a 2 hour day time nap every day.

When Jamila first started attending nursery her sleep hadn’t changed at all to begin with. Then after her second week Jamila’s mum noticed that Jamila was falling asleep on the journey home from nursery at 5.30 in the car for about 20 mins. She didn’t think it a big deal and just put it down to having an active day.  Then at 7 when it was time for Jamila to go to sleep after her bath she would begin to fuss and whinge instead settling quickly as usual  and not fall asleep till 8.30/9pm. She’d sleep well after falling asleep eventually but would then be waking around5.30/6am instead of being woken by her mother at 7 am. 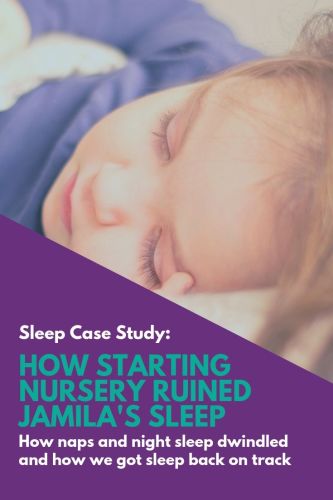 Jamila’s mum asked about how Jamila was sleeping at nursery and if she could perhaps have a longer nap. Jamila’s key worker said that Jamila usually napped for an hour with the other children at 12pm and that Jamila often needed help to go to sleep. Jamila was used to having 2 hours sleep during the day at home in her room, so her mother attributed Jamila’s shorter naps at nursery as no big deal.

Fast forward 3 more weeks and Jamila’s night time issues weren’t improving. She wouldn’t fall asleep until at least 9.30pm and seemed to be waking earlier and earlier in the mornings.  She was loving nursery but would often be extremely grouchy in the afternoons at home and at nursery. And was now only napping for 45 mins during the day.  Jamila’s mum was referred to me by a friend who had hired me as a night nanny when she first had her baby, she explained the situation to me almost apologising for disturbing me.

“I just want to know what I can do to sort out Jamila’s sleep issue. It’s not a huge deal as she does sleep it just that she never used to  get so upset at bedtime, she’d always fall asleep so happily and id have to wake her in the mornings what am I doing wrong. I thought that her starting nursery would be a really fun thing for her and, make her more tired and consequently sleep better…”

Usually in older babies and toddlers when a sleep issue occurs and that child has had well established bedtime habits and routines  in place AND been sleeping through consistently… the first place I start looking when I hear of changes to bedtime habits is change in the toddlers daily routine. In this scenario Jamila had started nursery, perhaps making her much more tired during the day than she usually would be at home.  She’s grouchy and irritable at bedtime so her mum knows she’s tired but she’s now takes longer to go to sleep, whereas before she always went off to sleep so easily.

Her mum continues to me on the phone….

“And that’s the other thing her daytime naps are so short now too. I thought that perhaps she was overtired and would need to nap longer but her nursery says that she naps for at least an hour  but then always wakes up ready to play along with another child. I just assumed that now that’ she’s coming up for 2 years old she wouldn’t need as much sleep during the day.“

I couldn’t help but think that it was the daytime naps that were causing the issue. Jamila had always napped for 2 an hours a day before she started nursery, but now she was only averaging an hour a day and sometimes napping as short as 30 mins when at nursery with her peers. Aside from her starting nursery something had changed, before we could find a way to get Jamila sleeping better we had figure out why she had such short naps now.

I asked mum to give Jamila’s key worker a questionnaire so that I could find out how Jamila was sleeping when she was at nursery.  Something wasn’t adding up. I got the questionnaire back the next day and recognized immediately what the problem was.

At nursery Jamila had been napping in a travel cot at nursery much like the one she had at home except the room where  children were napping in had broken blinds. The room wasn’t dark at sleep time like Jamila was used to at home. At home Jamila’s nap and bedtimes had been consistent and persistent in that she went down to sleep at the same times every day and the environment where she slept stayed the same AND was an environment conducive to encourage Jamila to go to sleep., Jamila’s bedroom had black out blinds and so the room would be dark when it was time for J to go sleep, and she was left to settle by herself with her sleepy music and in her sleeping bag at the same time every day.

At nursery, she went down to sleep at the same time as she did at home (12pm), she had her sleepy music like she did at home and her sleeping bag just like bedtime at home, however at nursery the room wasn’t dark due to the broken blinds and so things like wall displays and toys that could easily distract Jamila were easily seen and she had peers in the room with her, whereas at home she was used to going to sleep on her own.  The room where J slept at nursery was so light and stimulating because her peers and the grownups around and active at a time when Jamila was used to quiet and no activity in the room.  Jamila’s mother had explained to me, that even though Jamila had always slept well she was a sensitive sleeper and needed to be somewhere quiet to go to sleep. She played sleepy music to help Jamila off to sleep to drown out any sudden noises outside of Jamila’s bedroom (Jamila’s family lived on a busy road and had found that noise form traffic in the evenings used to prevent J from drifting off to sleep when she was younger, they bought a sound machine to play constant rhythmic music to drown out outside noise till she nodded off.

When J first started at nursery nap time didn’t seem a problem. She was naturally tired as always at 12pm and   would fall asleep easily and nap for 2 hours  for the first few days then her key worker noticed that’s she would sleep quiet restlessly on brighter  sunnier days but hadn’t thought anything of it rather than that Jamila liked to play outside and was anxious to wake up and play.

I suspected the lack of darkness at naptime was causing her to wake up completely when Jamila came into a light sleep phase, at home when in light sleep she’d hear her sleep music but the room would remain dark so shed drift back into deeper sleep but at nursery with so much going on in the background and the light in the room J would just wake up full of energy after a cat nap ready to play only to feel tired and grouchy in the afternoon when her mum picked her up. She immediately falls asleep in the warm soporific environment in the car only to wake energised again after 20 mins. By the time bedtime came around J would be exhausted but over tired and so would fight her sleep.

I knew we’d have to sort the day time naps in order to correct her night time sleep and restore her to her 12 hours blocks of sleep.

Sleep breeds more sleep and an overtired child fights sleep – the more sleep the get the more sleep babies and toddlers want! And Jamila’s newly active days were causing her a great deal of stimulation and excitement but she wasn’t getting enough daytime rest which was having a knock on effect to how she slept at night.

I knew we had to sort out the daytime naps so I asked mum if she could liaise with Jamila’s key worker and organise a dark place for Jamila to nap during the day or perhaps get the blind fixed so that Jamila could sleep somewhere darker. Her keyworker had the blinds fixed so now the room was dark for nap times. But alas Jamila’s sleep problem wasn’t solved instantly as we hoped would be the case. For the next week J’s mum and her keyworker both reported that Jamila was back to settling quicker and easier like she was before. She wasn’t fussing at bedtime like before however J was still waking after 45 mins at naptime.

At home if mum got to J before she jumped up and totally woke herself up, mum would stroke her face or cheek till she nodded back off and could usually get J to nap for a further 45/60mins but ta nursery once Jamila was awake there was no getting her back to sleep….there was too much fun for J to have.

I spoke with J’s key worker at nursery and explained that we needed to help J to sleep better at naptime so she could enjoy the rest of her day at nursery without being a grouch.  Her keyworker set and silent alarm on her watch so that after 40 mins of napping they could remember to sit with J ready to help her nod back off when she wakes after 45 mins.

And it worked. For 10 days J’s mum and key worker worked in partnership with each other and at naptimes they both set an alarm so as to make it Jamila before she woke herself up completely after a sleep phase and or when she came into light sleep and was likely to wake up prematurely, they'd be sitting with her ready to help her drift back off to sleep. After 10 days Jamila was able to drift back off to sleep by herself and eventually not wake at all after 45 mins. She sleeps for a minimum of 90 mins at naptime now and thankfully is able to last all day at nursery without being overtired.  Her mum picks her up 30 mins earlier form nursery to avoid her falling asleep in the car anymore and she settles quickly once again at 7 pm and wakes at 7 pm just like she used to before.